In 1987, Diana Princess of Wales visited London’s first AIDS Unit. It was a hugely significant and important event as during the visit she shook hands with a patient without wearing gloves. This historic moment was captured on film and the powerful image triggered a momentous shift in public and media perception of people living with HIV and AIDS.

This visit, now more than 30 years ago, forms the basis of a play written by Bren Gosling.

Moment of Grace is told from the viewpoint of three individuals - Andrew a patient at the Unit, scared about his diagnosis and who worries about the impact his coming out would have on his family and friends but who is excited about the prospect of a visit from the Princess; Jade, a nurse on the ward looking after HIV-infected patients, caring and empathetic but who keeps her job a secret from her friends and family for fear of what they might think; and Donnie, a fireman married to his childhood sweetheart, yet who is estranged from his only son and who has his own rather bigoted and ignorant views on homosexuality, HIV and women.

As well as exploring the impact the Princess’s visit has on the three characters, Moment of Grace also takes inspiration from the oral history testimonies collected by the National HIV Story Trust’s archives and other original interview material.

The play was originally due to run at The Actors Centre’s Tristan Bates Theatre but thanks to the Coronavirus pandemic it has now been reimagined for the screen and is being streamed for a limited period.

Due to the Covid-19 restrictions, the three actors shot the scenes in their own homes using a single phone camera, with no crew and using remote direction by Nicky Allpress.

The result is a film/theatre hybrid beautifully shot and sensitively told, treating the issues of HIV raised at the time - ignorance, prejudice and lack of medical knowledge in how to treat it - with compassion and sensitivity. It manages to intertwine the lives of the three people whose story it tells in a way that has you smiling and then welling up throughout.

The three actors - Luke Dayhill as Andrew, Lucy Walker-Evans as Jude and Andrew Paul as Donnie - are terrific and seeing their faces so close, with all the emotions etched onto them, adds to the intensity of the piece.

Engaging, powerful and full of emotion, in short it is storytelling at its best.

Moment of Grace is available to watch via The Actors Centre website until August 9. Tickets cost £6.

I don't normally do recipes. Anyone who knows me knows I don't cook. I bake cakes but that's about as far as it goes. However, this recipe was made by my 11 year old son who is great at cooking/baking. He made these on Friday and they are awesome. So I thought I should share the recipe. We used rice flour which was actually a bit past its sell by date and a mix of dark and milk chocolate. 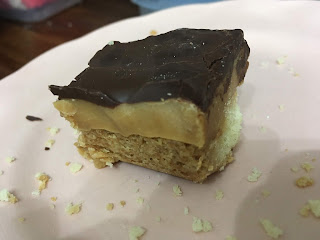 Up next from the National Theatre - Frankenstein and Antony and Cleopatra

The next two National Theatre productions to be streamed live on YouTube will be Danny Boyle's production of Frankenstein - filmed at the NT in 2001 and screened on Thursday April 30 and Friday May 1 - and Antony and Cleopatra on May 7.

They will be screened at 7pm via the National Theatre’s YouTube channel as part of National Theatre at Home; the new initiative to bring content to the public accessed from their homes during coronavirus.

Frankenstein sees Benedict Cumberbatch and Jonny Lee Miller alternating the roles of Victor Frankenstein and his creation. The two versions will be shown across two nights: 30 April and 1 May.

Simon Godwin’s sell-out production of Shakespeare’s Antony & Cleopatra featuring the Evening Standard Theatre Award-winning performances by Ralph Fiennes and Sophie Okonedo as the famous lovers will be streamed on 7 May.

Today also sees the launch of the National Theatre at Home Quiz, to be played from home featuring familiar faces from the world of stage and screen as the quizmasters. Each quiz will include rounds of five questions on a wide variety of topics.

On the final Monday of each month people will be able join the virtual quiz directly from their homes via the NT’s YouTube channel and Facebook page live at 7pm. The first quiz will be on Monday 27 April with quizmasters Dame Helen Mirren, Sir Lenny Henry, Lesley Manville, and Sir Ian McKellen asking questions on topics including history, sport, nature, and of course, the National Theatre.

Rufus Norris Director and Joint Chief Executive of the National Theatre said “We’ve been completely overwhelmed by the response to National Theatre at Home since we launched at the start of April. We know that these are difficult and challenging times for many, and we hope that through this initiative we’re able to supply a weekly slice of entertainment for people to enjoy together, albeit digitally, when each production goes out at 7pm on Thursdays. We’re thrilled to be announcing the next two titles today, Frankenstein and Antony & Cleopatrawhich both feature award-winning performances and I’m sure will be enjoyed by all. We’re also pleased today to be launching the National Theatre at Home Quiz featuring some familiar faces posing the tricky questions. I’d like to thank all the artists and creatives who have continued to support us in being able to deliver this programme for free and also the public for tuning in every week and sharing their experiences of National Theatre at Home from right across the world.”
Posted by Kate at 15:20 No comments:

Southwark Stayhouse is a brand new online streaming service from Southwark Playhouse where the theatre be sharing shows and exclusive video content until its doors are able to open again on Newington Causeway. All shows are free, so you can watch them whenever you want.

First up is Wasted, a new rock musical about the Brontë siblings in 2018. It’s directed by Adam Lenson with music by Christopher Ash and book and lyrics by Carl Miller.
Also on the list is the riotously fun take on Twelfth Night, set at a music festival (Ilyria, obv) which was staged in 2019, directed by Anna Girvan as part of our Shakespeare for Schools programme. Also in the mix is Bound by Jesse Briton which premiered in the theatre's former old Vault space at London Bridge and went on to be nominated for an Evening Standard Award for Most Promising Playwright.
Alongside these three full-length shows Southwark Playhouse will be releasing more content fortnightly plus any projects their pals are doing like Philip Ridley’s The Beast Will Rise monologues – from the world premiere of The Beast of Blue Yonder which was due to open at the beginning of April.
The online link is www.southwarkplayhouse.co.uk/streaming/
Happy watching!
Posted by Kate at 15:15 No comments:

I love Shakespeare. I grew up near his home town of Stratford and spent most of my childhood at the RSC watching his plays being acted out. I fell in love with the language, the stories and the characters.
Thanks to my job I’ve spent most of the last seven years in and around theatre, writing about it, reviewing plays and interviewing those amazing actors who grace the stage.
Unfortunately the COVID-19 crisis has stopped all that - at least temporarily. However, the RSC has come up with a great way for us to stay connected with its Share Your Shakespeare initiative.
They are asking people of all ages to film or photograph your Shakespeare in any way you like and then upload to social media platforms such as Instagram, Twitter or YouTube tagging @theRSC and using the hashtag #ShareYourShakespeare.
Ideas put forward can be a performance of a famous Shakespeare speech or sonnet, painting a picture, or baking a cake with a quote written on the top in icing.
A speech, quote or sonnet should be one that speaks to you, or makes you laugh, cry or shed a tear, or it could be one that reminds you of somebody or something.
here are a few the RSC has come up with:
No idea is too silly! So, what are you waiting for? Get bold. Get creative. Get involved!
Whatever it is have a go - the RSC will share its favourites on its social media platforms over the next few weeks and in the run up to Shakespeare’s birthday on April 23.