A Grand Day Out - on a budget

AS any parents of young children will testify, going out even for a day requires a level of planning that is akin to a military operation.


It can also be expensive - travel, entrance tickets to museums or other attractions, food, drinks, snacks and a visit to the gift shop - it can all mount up.


But it need not be like this. With a veritable cultural and entertainment feast right on our doorstep I was determined to prove that living in South London need not mean bankruptcy to keep the little darlings entertained.


Eager to put this theory to the test, I embarked on a visit to the South Bank on Sunday last week with my two children - Lucy, eight, and Tom, four - to see if it was possible to enjoy a day out without it costing me the earth.


We set off from our home in Brockley armed with sun cream, packed lunch, snacks and water in a rucksack that wouldn't have looked out of place on a trek to the Himalayas.


Our one day travelcard cost £7.90 - not bad considering it would have taken us anywhere within zones one to six.


Once at Waterloo we walked up to Southbank Centre pausing to see the skaters in the Undercroft and some of the street entertainers along the way.


For those on a budget, the Southbank Centre offers the perfect opportunity to have fun and spend little in the process.


Every day there is something on within the complex which you can enjoy for free - whether it's a workshop, exhibition, performance or even just sitting in its riverfront café to eat your sandwiches and watch the world go by.


And Sunday was no exception. Under the umbrella of Festival of Neighbourhood the weekend was devoted to Urban: Celebrating Street Culture featuring a series of BMX, Parkour and dance workshops and demos as well as a chance to take part in some of the performances.


So the three of us joined the huge crowd on the Royal Festival Hall terrace and had fun busting some moves and grooves to a mix of street dance, hip hop and breakdance tunes which were being blasted out via an enormous sound system.


We were also wowed with a BMX bike demo inside in the Clore Ballroom where a group of professionals showed off their skills and tricks and Tom had a go at some of the free basketball workshops.


As well as all the Urban cool there was plenty more to see and do. 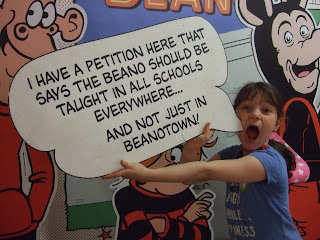 This included Beano Town tucked underneath the Queen Elizabeth Hall. This interactive, and free, exhibition pays homage to the legendary comic The Beano which celebrates its 75th anniversary this year. 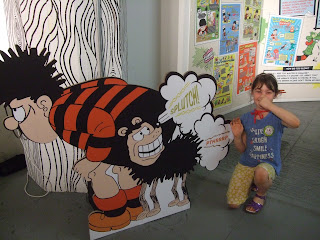 Despite having never had the pleasure of chortling at the antics of its characters, Lucy and Tom wasted no time in getting stuck in - from playing table tennis to looking at the comics, climbing on the sculptures and trying on wigs and Dennis the Menace jumpers. They also added their names in the tree house.


Elsewhere we explored the walkways by the Queen Elizabeth Hall to see the allotment project, Queen's Walk Window Gardens. This included a trail of 60 wheelbarrows full of plants, as well as a roof garden created in partnership with Cornwall's Eden Project, the herb garden on the Riverside Terrace and the other giant installations and sculptures around the complex. 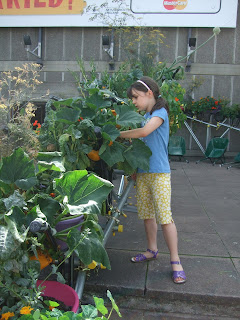 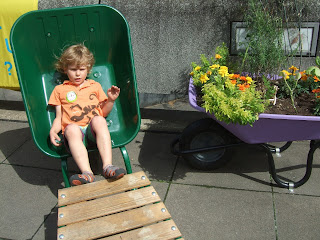 Perhaps the most fun to be had were the fountains outside the Royal Festival Hall. Both kids dived straight in and trying to dodge the jets of water without getting soaked was all part of the deal with much merriment to be made in doing so. 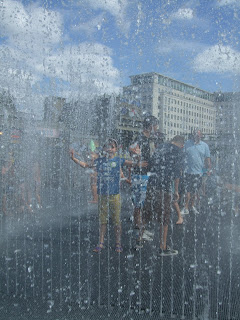 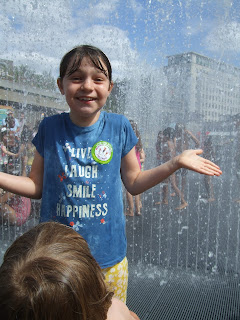 And before we had to go home there was just enough time to build a sandcastle in the specially created beach down on the river front opposite the skateboarders in the Undercroft. 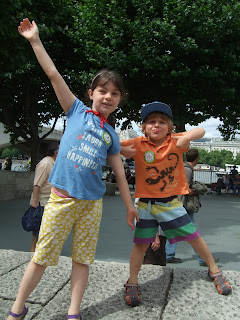 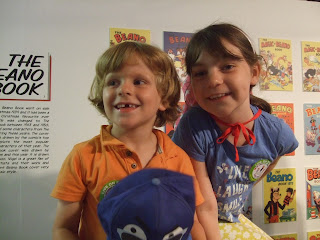 Apart from the travel card, the only other thing I parted with my cash for was an ice cream for Lucy and an ice lolly for Tom - both bought at the market outside Canteen at the back of the Royal Festival Hall.


At £2.50 each it wasn't as eye wateringly expensive as it could have been, and given I'd spent nothing all day save for the travel card, it wasn't too bad.


We didn't buy lunch because we bought our own which we ate outside whilst soaking up the atmosphere.


By about 5pm we were exhausted, covered in sand, but having had a lovely time.


And while the South Bank isn't the only place where you can do things on the mega cheap, there can't be many institutions which will allow you to eat your own sandwiches in its building whilst listening to or watching some free concerts or performances.


And not only did I not hear the words "I'm bored" the entire day, the kids loved it so much they want to go back this weekend. Result 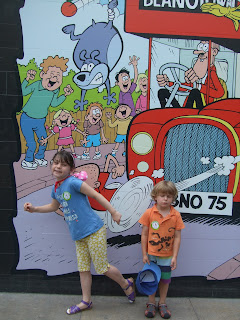 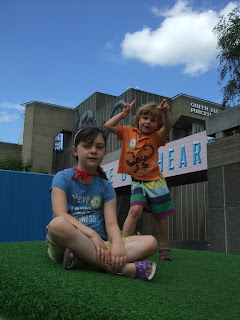 Beano Town is on until Sunday, September 8. Entrance is free.


Check www.southbanklondon.com and www.southbankcentre.co.uk for full listings of events throughout the holidays.

Email ThisBlogThis!Share to TwitterShare to FacebookShare to Pinterest
Labels: Days out

Grooving on down the road

ANYONE into hip hop is in for a treat this summer with an exhilarating new dance adventure for the whole family.


Following the success of hit shows Into The Hoods and Some Like It Hip Hop, the award-winning ZooNation Dance Company is back at the Southbank Centre with a re-working of the much loved story of The Wizard Of Oz.


Written and directed by ZooNation founder and award winning choreographer Kate Prince, Groove On Down The Road showcases the not inconsiderable talents of some of the company's young dancers aged between 10 and 19.


But whereas the original story was set on a farm in Kansas, Kate's version is brought bang up to date and is relocated in an urban classroom.


It is here where Dorothy's adventure begins and where her relationship with Toto, Scarecrow, Tin Man and Lion develop.


And although they dance their way down the yellow brick road, it is not to Oz but through a fantastical urban world - and with a pair of ruby trainers in lieu of the ruby slippers.


But it was not a desire to re-work the original story that was at the forefront of Kate's mind when she decided to create the show.


"I have a group of four boys aged between 15 and 17 who are part of ZooNation and are the most spectacularly talented group of young men I have ever worked with," she enthuses as we chat ahead of the show's opening on Saturday.


"They are just incredible and I was looking for something to showcase their talents which meant I needed a story with four lead characters.


"I also had Portia who is one of the girls playing Dorothy and she's an amazing dancer too so I wanted to include her - and in the end it just made sense for the show to be based on The Wizard Of Oz."


So why the classroom?


"I set it in a classroom because I wanted to highlight the importance of including the arts in education," she explains.


"The importance of creativity and the arts within education is enormous - especially for those kids who feel alienated in some way - and they should have equal importance within the curriculum.


"The Scarecrow for example, who doesn't have a brain, is dyslexic but hugely intelligent in a different way that isn't appreciated within the education system.


"So, it's a chance to explore some of the issues kids face and how important the arts are to their self esteem and confidence," she adds.


"This has been proved through the work we are doing in ZooNation. By getting kids dancing it improves their self esteem and personalities and makes them feel they can achieve something. It has so many benefits."


As well as a great story, the show will feature a fabulous score with a mix of music by Michael Jackson, Stevie Wonder, Justin Timberlake, and Jose Gonzalez.


"Telling the story through dance is fantastic and so the music is incredibly important obviously," says Kate.


"But there is a real range as the production will feature some incredible hip hop, body popping, street dance and contemporary movement from the cast.


"They are just phenomenal and I'm so proud of them - many have been at the company since they were very young, having been inspired by seeing some of our other productions which is fabulous," she adds.


"And they work so hard - some get up at 5am every Saturday and travel from all over the country just to come and train in our classes. They are truly inspiring."


And for the young cast to be part of such a show a dream come true.


"I'm so excited," says Portia Oti. The 11-year-old from Bexley will join Arizona Snow to share the role of Dorothy.


"I am really thrilled and it's a dream come true for me. To be on the Southbank stage will be amazing," adds Portia.


"It's a lovely family show to be in and I think the audience will love it because of the way Kate has created the characters - there is a lot of laughter especially when the Lion does his dance!"


The teenager from Tooting plays the Tin Man and says the audience will be moved by the stories behind the characters.


"You get to see some of the troubles young people face," he says. "I'm the Tin Man who hasn't got a heart and it explores the reasons behind that.


"The audience will see he's a bully and how he learns to be friendly.


"I went to see Into The Hood when I was about 13 and loved it. It really inspired me to want to dance so I joined the company and went to their classes.


"I've been with the company for five years and love it - we learn different forms of dancing and it's hard work but great fun and for me to be in this show is just amazing - the best experience of my life!


"To share the stage with all my friends doing something we all love doing will be the best feeling!"

Groove On Down The Road is on at the Queen Elizabeth Hall, Southbank Centre, from Saturday, August 10 until Sunday, September 1.