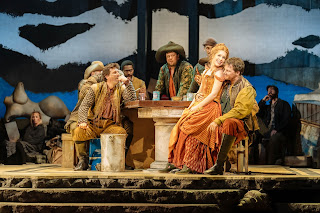 Man of La Mancha is a curious beast. Often dubbed as one of the classic “lost” musicals, it was last seen in the West End in the 1960s but is currently being revived at the London Coliseum.
Based on Cervantes epic novel Don Quixote and set during the Spanish Inquisition, it’s a musical with a play within a play.
To cut a somewhat long story short, Cervantes is thrown in an underground jail with his servant Sancho Panza. As well as his right hand man he brings with him a chest full of treasures including his beloved and unfinished manuscript of Don Quixote.
A kangaroo court is summoned by the inmates of this prison in which he has to defend himself and save his manuscript from being tossed in the fire. He does so by telling the story of Don Quixote the chivalrous wannabe Knight who lives in a fantasy land. But is he mad, delusional or does he just have a rather vivid and overactive imagination?
Interspersed with the action is the music including its most popular hit, The Impossible Dream. It sums up perfectly the age in which we are currently living - that of wanting and hoping for goodness in a corrupt world.
The big draw undoubtedly is former Frasier star, Kelsey Grammer, who plays Cervantes/Don Quixote and by and large he delivers a solid performance though he lumbers through some of the scenes. His voice is strong and he raised the roof with his rendition of The Impossible Dream.
Elsewhere Nicholas Lyndhurst raises more than a chuckle with his blotto innkeeper and Peter Polycarpou is a delight as Sancho. Cassidy Janson - who shares the role with Danielle de Niese - as the tavern wench Aldonza and in whom Don Quixote reimagines as the romantic heroine Dulcinea, brings a warmth and energy to the stage which is lacking elsewhere. It is a shame many of the scenes she is in see her being pawed over by the men in the tavern resulting in her being beaten and raped by them.
Despite this, and some oddly and perhaps not intentionally humorous moments, I rather liked it.